This is a transcript of my talk at the 235th AAS Meeting in Honolulu at the Special Session - AAS Astronomy Ambassadors: Professional Learning Community, Moving Forward, held on January 5th, 2020.

In November of 2013, I was on a mountain in Chile learning that the instrument I needed to do my thesis couldn’t be put on the telescope for technical reasons. But I had already registered for the Winter AAS meeting for the following January. Luckily I was selected as an AAS Astronomy Ambassador. I hoped to bring more astronomy-related activities back to our department for our outreach events. So, I went to the meeting, presented a poster on my failed instrument, and gained access to an amazing cohort of science communicators and resources. 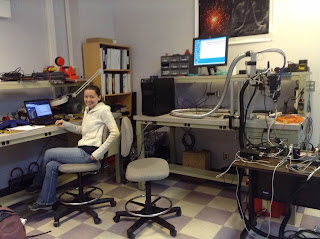 Read more »
Posted by JoEllen McBride at 10:24 PM No comments:

We need to start being honest with girls about science

"My daughter has a question for you," the video began. An adorable 3 year old girl asks breathlessly, "Why does the Sun stay still?" I had to message my friend separately to find out what exactly her daughter meant. She told me that in school her daughter learned that the Sun sits still and the planets move around it. Her daughter wasn't having it. She was very concerned. Everything else in the world moves, so why wouldn't the Sun? I quickly told my friend that her daughter was absolutely right to be concerned because the Sun does not sit still. Just like the planets orbit our Sun, the Sun orbits the center of our galaxy along with billions of other stars. I also told her how much her daughter kicks ass for questioning what she was told and using her everyday experiences to come up with really amazing questions. It's what scientists do.

Science has a girl problem right? We leave our fields of study in droves at every level after middle school. There are tons of after school and summer programs aimed at getting young girls interested in science. Those programs work. You'll find girls just as interested in science at the elementary and middle school levels as boys. As my 3-year old buddy shows, gender has no impact on a child's ability to do science. So why should it be any different as those kids grow up?

Read more »
Posted by JoEllen McBride at 9:55 AM No comments:

Email ThisBlogThis!Share to TwitterShare to FacebookShare to Pinterest
Labels: women in science

We’ve all heard “Hard work and determination are all you need to succeed. Look at me. I pulled myself up by my bootstraps, without any help.” These words might be considered motivational to some, but can seem like criticism to others. Determination and hard work were critical to my earning a Phd in astronomy, but the support from others was also instrumental in making my success possible.
Read more »
Posted by JoEllen McBride at 12:06 PM No comments:

Experiences shape us and we are shaped by our experiences. But experiences are just an accumulation of little interactions with the world around us. Some of these little interactions, if they happen often enough, start to have a big impact on your overall experience. Talking about your own experiences and how they differ from others can help bring awareness to the inequalities we face. For me, that started by posting short Facebook statuses highlighting a few of my experiences as a white, straight, female astronomer. I am summarizing my posts here along with discussion. I hope that these posts give you a glimpse of another human's experience and encourage you to tell of your own experiences.
Read more »
Posted by JoEllen McBride at 3:04 PM No comments:

A Little Girl As My Guide

I fell in love with Astronomy after watching Carl Sagan's COSMOS series. My mom would rent them from the library for me when I was seven or eight years old. I can recall seeing Dr. Sagan working with the Voyager team, going over images taken by the satellite and thinking "That's what I want to do. I want to be a part of a team pushing the boundaries of knowledge." The way astronomers study the mysteries of space fascinated that little girl. They can't touch anything out there. They can't change it and see what happens. All they can do is watch. Now that little girl is an astronomer, and she's still fascinated by the field, but she isn't part of a research team. My path did not lead her there. That little girl acted as my guide through this whole journey, pushing me forward. I want to thank her for not giving up on me and helping me through the obstacles thrown in my path.
Read more »
Posted by JoEllen McBride at 10:00 AM No comments:

The Resurrection of Planet X

Earlier this week, two astronomers at Caltech announced that they had observational evidence of a ninth planet orbiting in the far reaches of the Kuiper Belt. The planet has not been directly detected but its effect on the orbits of six dwarf planets was observed. Based on theoretical models, the most likely explanation for the unexpected orbits of these icy bodies is a planet, 5 to 10 times the mass of Earth. They're calling it Planet Nine, but I remember when I first became interested in Astronomy at 7 years old, reading about the mysterious "Planet X" that many believed orbited somewhere in the Kuiper Belt. The story of the search for Planet X and other far orbiting bodies is apparently far from over.
Read more »
Posted by JoEllen McBride at 8:18 PM No comments:

Where Galaxies Live and How that Affects Star Birth

I gave a talk on my research at the North Carolina Museum of Natural Sciences. View it here!
Posted by JoEllen McBride at 11:00 AM No comments:

JoEllen McBride
Dr. JoEllen McBride is a mom, science communicator and astrophysicist whose main purpose is to make science inclusive and accessible to anyone that wants to participate. She earned her PhD in Physics from the University of North Carolina at Chapel Hill in 2016. Her research focused on galaxies that live close to each other and how that affected their ability to create stars. After that, she was a AAAS Mass Media Fellow at Voice of America in Washington D.C. and an adjunct faculty member in the physics department at West Chester University. She is now the Associate Director of the Graduate Student Center at the University of Pennsylvania. Dr. McBride is still active in the science community through her advocacy work, serving as Advocacy Director of the 500 Women Scientists Philly Pod, a member of the AAS Committee on the Status of Women in Astronomy, and a Board member of the American Helicopter Museum in West Chester. She also raises her two daughters, Carina and Alessa, with her partner Ed, and the help of her two kitties, Thelma and Louise.